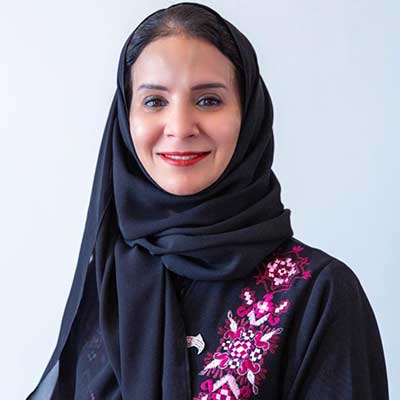 The Center for Value in Health (Saudi Arabia)

Dr. Reem Bunyan is the CEO of the Center for Improving Value in Health which is part of the evolving transformed Health System in the Kingdom of Saudi Arabia; a national independent center that fosters the enhancement of the national health system by improving value in health and contributing to building a true learning health system.

She co-chaired the G20 Health Working Group in the year 2020 where she led discussions on the topic Improving Value in Health Systems among other important topics in Global Health. G20 Members supported and welcomed the establishment of a Global Innovation Hub for improving Value in Health with voluntary membership of G20 members and other nations. The Hub’s secretariat is hosted in the Center and Reem serves as its Chief Executive. In May of 2021, she was awarded the honorable King Abdulaziz Order of Merit (Second Class) for this work.

Reem served as the National Lead of the Chronic Disease System of Care, Model of Care Program, Vision Realization Office, Ministry of Health. She also led the Model of Care (MoC) Unit in Cluster E1 from inception till April 2019 for a period of two years with the fortune of experiencing the initial implementation of the CD SoC in the nation and designing and implementing the first MoC operating model in a cluster.

She was involved in the design of the national blueprint of the new Model of Care (MoC) that is part of the National Transformation initiative at the Ministry of Health and led by the Vision Realization Office. This initiative took off in October of 2016 commencing with the design of the new model in March of 2017. As a National Lead of the CD SoC, she led a team of approximately 50 participants from all over the Kingdom, of various specialties, and from various sectors. Together with the other SoC leaders, she worked with experts from Oxford University led by Sir Muir Gray and a group or national and international advisors in the field of healthcare reform. She later took the lead role for the Model of Care initiative in the Eastern Region in the newly formed E1 Cluster where the first implementation of the model in the nation took place. She took on executive leadership roles at KFSHD through this process; the Executive Director of Medical & Clinical Affairs and the Acting Chief Executive Officer for the organization. She then led the MoC initiative in the newly formed First Health Cluster in the Eastern region of the Kingdom (E1 Cluster). She led the taskforce that produced the two-year plan for the cluster, designed the execution plan, and early steps of implementation.

In her national role and with the success of the initial implementation, HE the Minister of Health announced that 2019 would be the year when the hypertension pathway would be implemented across the nation.

She then moved on to work on the establishment of the Center for Improving Value in Health (CiV) in November of 2019.

Reem is an American Board Certified Neurologist who is super-specialized in Multiple Sclerosis with rare expertise in pediatric Multiple Sclerosis and practices at King Fahad Specialist Hospital Dammam (KFSHD). She is passionate about her clinical work and sees it as firm grounding for her leadership roles.

Prior to this, Dr. Bunyan established the first clinical Neuroimmunology Program at King Fahad Medical City Riyadh in addition to establishing a state-of-the-art department for clinical neurophysiology with highly qualified staff, an accredited national training program for technologists, and equipped with the most advanced technology including MEG (magnetoencephalography). She then led the Neurosciences Center at KFSHD; the only specialized center of its kind in the Eastern Province. In this role, she was able to establish a program-based approach to nervous system disorders utilizing multidisciplinary teams. After joining KFSHD, she attended an executive Master program in Healthcare Administration with the University of Alabama Birmingham in collaboration with KFSHD. Her final project was on teleneurology and explored linking hospitals in the Eastern Province for the management of patients with nervous system diseases.

Reem is the President of the Saudi Multiple Sclerosis Advisory Group (SMSAG) that has the mission of advancing patient and practitioner’s knowledge in the field and is a member of the newly established Saudi MS Chapter. She chairs the national MS registry steering committee.

Dr. Bunyan attended medical school at King Faisal University, Dammam graduating with honors and receiving the Prince Mohammed bin Fahad award for academic excellence. She then went on to residency training in Neurology at the University of Louisville, KY followed by an initial fellowship in clinical neurophysiology and neuromuscular disorders.